Imagine that a tourist calls an emergency service speaking a foreign language. How to find a person that speaks the right language?  Or you have tons of multilingual television broadcasts in need of automatic translation or subtitling. Most current automatic speech recognition (ASR) and other language technology tools assume that the source language is known and does not change abruptly. Furthermore, the current off-the-shelf automatic language identification systems are text-based, which means that the speech should first be transformed into some kind of a script. But this can not be done by ASR without knowing the language first. This is the problem called spoken language identification (SLI).

Humans are capable of recognizing familiar languages with high accuracy. Still, the task of distinguishing between several unfamiliar languages is surprisingly challenging, even for the human listener. Brain studies have shown that when attempting to recognize an unfamiliar language, people pay attention to low-level acoustical cues such as different sound patterns or intonations. On the other hand, for familiar languages, they recognize languages from semantics such as grammar. In other words, if you understand what is being said, then the language must be obvious.

Three approaches to solve the problem

For machines,  the three main approaches for SLI are phonotactic, acoustic-phonetic and language embedding. The phonotactic models use first a phoneme recognizer to transform the audio into a phoneme sequence and then a language classifier to detect unique patterns and structures in the phoneme sequences to identify the language. While phonotactic models can be accurate at recognizing languages, they are severely limited by the performance of the phoneme recognizer in the variability of  target languages and audio quality. Acoustic-phonetic SLI models, on the other hand, separate languages directly in the acoustic domain, detecting the characteristic acoustic structure of each language. They only require audio files labeled by the language for training. The idea of language embeddings is to use the training data to learn a low dimensional vector space where the acoustic samples can be mapped to vectors and the distance of two vectors imply similarity of the languages. Much of the language embedding work originates from speaker identification, where the two best known embedding methods are the so-called i-vectors and x-vectors.

In his Master’s thesis, Matias Lindgren from Aalto University studied different deep learning based approaches for detecting natural languages from speech data. He analysed and compared several state-of-the-art SLI models on various speech data. The main results in the thesis are the following: 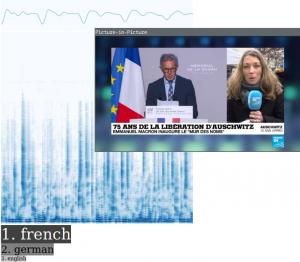 Spoken language identification tool shows the most probable languages identified in the audio.

See yourself how it works from this example video of using the real-time spoken language identification demo. As in the MeMAD’s real-time audio tagging demo, more work and training data would be required to make the segments more coherent for practical use. This demo does not try to model the language transitions. Nor does it separate speech and noise regions to produce a smooth output. Nevertheless, it is a very good start on an important topic to improve accessibility and discoverability of audiovisual content.